“…Remember the feeling as a child When you woke up and morning smiled It’s time you felt like you did then. There’s just no percentage in remembering the past It’s time you learned to live again at last. Come with me, leave yesterday behind And take a giant step outside your mind.”

This song has been a little earworm going ‘round and ‘round in my head for the last few days. We find ourselves excited with our Icelandic adventure to start in a few hours tho’ there is just a tinge of apprehension coloring our plans. This is, for us, a huge leap in Rich’s recovery. In the past two years, we’ve taken weekend trips to visit family or traveled with friends. The support has always been close by and there always has been accommodation for Rich’s needs. Tonight we step onto the Icelandair plane and take, as the Monkees sang, a giant step outside our minds.

With us will come our assortment of medications both required and emergency. Rich’s cane will be our companion. We’ve opted for tours instead of our usual take charge kinda travel. Our schedule is varied but gentle. Our trip is a quick five days. With all these precautions, we’re still trying to get out of the patient mode that has deviled us on our journey.

“You stare at me in disbelief You say for you there’s no relieve But I swear I’ll prove you wrong. Don’t stay in your lonely room Just staring back in silent gloom. That’s not where you belong”

Ah, patient mode. We were well on our way to getting out of that gloom when just about a month ago Rich woke up with chills. Dammit. The Magic Fingers Bed was back with a vengeance. It took a full hour to stop the rigorous shaking that exhausted him and left him aching from head to toe. A handful of meds to counter the symptoms of an infection that seemed on its way, we waited for the doctor’s office to open.

I went to work figuring that this would be a quick Tamiflu script and we’d be fine after a few days. This was the first time in these two years that I was not planning on going to an appointment with Rich… because, you know, we’re getting outta patient mode. As I was speaking in a meeting at work, I suddenly stood up and said “I have to leave” and walked out the door. It was odd how strong that feeling was.

Rich was already en route via taxi to the doctor’s office and I texted him that I would meet him there. By the time I got to Great Neck, he was waiting in an exam room, having had an xray of his lungs to rule out one of the vast arrays of pneumonia he seems to latch onto. We sat and chatted while we waited for a doctor to see us.

During the short wait, Rich became uncomfortable. He complained it was hot which to me was understandable since he still had his hat and coat on. The complaints continued tho’… quite unlike him. The light was off in the room as is our wont. We find it easier to relax in a dim room when we’re in situations that could be tense. We’ve at times joked around by putting a candle gif on our phones and pretending we were on a romantic date; anywhere but a doctor’s office.

This time the romance ended when Rich started making heaving sounds. I flicked on the light and could see that this spasm wasn’t coming from his stomach but from his throat. I asked him if he was ok and there was no response. I got up, saw he was pale and clammy… beyond his glasses, his eyes were rolled back in his head as he continued to make these retching noises. I called out for help and the staff responded quickly, checking his vitals and getting him on oxygen… and calling 911. He pinked up quickly and came around though for the life of him he could not figure out how many fingers the PA was holding up in front of his face. 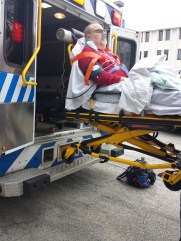 And so started a thirty-six hour marathon stint in the ER. The one place we didn’t want to be. Rich does get a separate room when he is in the emergency room because of his lowered immunology. But as a melting pot of germs, it’s still not optimum. His blackout was probably due to dehydration and a drop in blood pressure but being a single incident and his diagnosis to be otherwise Type A flu, we began our campaign to get discharged which was not as easy as one would think. Until our pulmo guru came on duty and stopped in. Immediately he was on board to get us home even while the hospital was prepping a room on the cardiology floor. Once again we are filled with gratitude for the team we have. They listen to what we say and respond with common sense. We’re blessed.

Once home, Rich’s recliner became his cocoon as he worked through the effects of the flu. We were again sleeping in the little room on the main floor as stairs were not yet possible. The walker was brought back into service. And yet it was good to sleep on something other than the cold tile floor. It took two weeks for him to begin to get to where he had been before this episode, the Tamiflu knocked back a good amount of the discomfort relatively speaking, but slowly progress was made.

And now prep for our trip began in earnest. But this episode did raise some flags we had thought we could put away for good and brings us the slight apprehension that we are doing our best to totally disregard. Instead we’re focusing on doing what we love most together… seeing new sights, meeting new people. The weather holds no promise for a viewing of the Northern Lights, the Hákarl fermented shark will still probably be the worst tasting thing we’ll ever try, and English will not be the first language of the citizens of the city we’ll call home for the next five days, but our itinerary will be more than we could have dreamed of doing a short six months ago. And for that we’re grateful. It’s time.

“Come with me I’ll take you where the taste of life is green And everyday holds wonders to be seen.

Come with me, leave yesterday behind And take a giant step outside your mind.”