Walt Whitman wrote in his poem:

They will not let me off till I go with them, respond to them And discorrupt them, and charge them full with the charge of the soul.

Rich’s PET scans, CT scans, MRI’s, X-rays, all reminded me of the first line of this poem. The same line that Ray Bradbury, one of our favorite authors, used as the title of one of his short stories. The same title that the song from Fame used, the lyrics to which include:

With the cancer related deaths of David Bowie and Alan Rickman among others in the entertainment industry this week came an avalanche of media reporting that all included the phrase “battle with cancer.” And so Walt Whitman’s armies spring to mind once again.

We haven’t felt our particular journey to be a battle but the attention to the phrase brought about some research that made us think. In retrospect, perhaps battle is not such a bad term at all. It has its roots in Old French bataille from Late Latin battualia. The dictionary gives it to mean “exercise of soldiers and gladiators in fighting and fencing.” Not perhaps appropriate. The Latin from the Germanic battuere means “beat” which is one of our goals. Modern definitions include combat, conflict, contend with, struggle, or engagement. OK.

There is certainly struggle with cancer and its treatment… another word that seems to pop up when talking about cancer. And while we’ve had our struggles, again, not a word that would immediately come to our minds. We’ve definitely been in conflict with cancer… it has different agendas than we do. And yes, we’ve engaged cancer in a type of combat by throwing whatever weapons we can find at it. But again, none of those would totally define how we choose to view the last two years. There are different types of battles… battle of encounter, battle of attrition, breakthrough, encirclement, envelopment, annihilation. Certainly chemo is one of attrition… we strive to have lesser losses than cancer. Breakthrough… yep. Get through those defenses to find the vulnerable flanks. Annihilation… yeah, that’s been our end goal from the get go. Destroy the basterd. Those definitions would again negate our viewpoint.

But just as there are multiple types and definitions of the word battle, there are also numerous ways to approach it. If we were required to battle, our view would be more like Jujutsu… the martial art whose name can be translated as “the art of giving way.” It uses the enemy’s energy against themselves and thereby neutralizing their threat. So many of the modern chemo cocktails do the same, as we’ve learned on our journey; using the DNA of the cancer cells to neutralize them. We strive always to continue forward, not retreating in the face of an obstacle, but searching for resolution, a way to slip past. Rich has plowed through, courageously in my opinion, the side effects of cancer and its treatment. Sometimes it’s been a fight to do so but overall, these words that define our journey as an aggression just don’t seem to fit.

We’ve striven, over the last two years, to look at this as a puzzle to be solved. A path with detours to take. A goal to reach by the best means possible. By treating it that way, we tried to eliminate the angst and tension that the word battle brings to mind. While not passive on our journey… everyone needs a good compass to guide them… we have attempted to meet the challenges head on and be as best prepared as possible. When we approach our journey this way, we leave ourselves open for the joy in life instead of a focus on the negative.

We can visualize this path we are on as one of the many wooded paths we’ve hiked and see the obstacles cancer has put in our way as the temporary moments they are… to be considered no more than a rise in the path, a boulder on its way elsewhere, a sudden stream from a quick rain. We navigate them and continue on and marvel at the light as it filters through the branches when the sun peeks through the clouds and we know we are where the universe means us to be. We fill our spirit with these images.

As we moved past the treatment phase and into the recovery, our journey was even less battle-like although our many trips to the hospital may not have seemed so. Before Rich went into the hospital for his last chemo marathon and the stem cell transplant, we went to the beach. Our first summer that we were dating was filled with sand and surf, a crowd of us filling the bus to either the north or south shores of Long Island. But this day, fatigue made it impossible to get to the water’s edge; instead we sat in the sun on the boardwalk and in the distance we could see the water’s tide moving in. The water would then pull back out but with each incoming wave, further up the sand the edge of the surf would come. Two steps forward, one step back, two steps forward… This movement of the water defined our experiences this past year. Like a tide coming in, we’ve had our forward movement, sometimes too slow to discern, but always there. A stumble back, temporarily, then stronger again forward. Progress.

In the dark of the night, when negativity can give way in a tired mind, the zen of the ocean’s heartbeat gives strength that we have been on the right path. There is a peace in that rhythm. That we will reach the point on the beach where we need to be. This has served us well. By releasing negativity and the tension of battle, we can use our reserves of strength to move on. 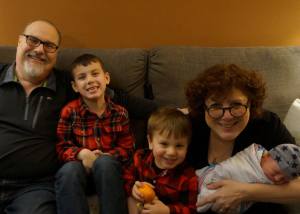 And moved on we have. With the new diet that we began in December has come new strength and clarity. We spent Christmas week in Rochester welcoming to this world our newest grandson and luxuriating in the frenzied activity of our other two. Surrounded by family, we reveled in the holidays. We made sure the Rich did not overdo but it was apparent that his energy levels have improved significantly. Our stem cell guru, who we saw before we took to the road, was thrilled with his progress. While acknowledging the results of the new diet, she said that many of her patients report that at a certain point in time after weaning off the corticosteroid, it seemed like a light switch turned back on. We rejoice in the evidence of this bane’s release. We still need to watch the gluten/fat/dairy/sugar involvement in our diet… there are swift and uncomfortable ramifications if we don’t… but it is good to have confirmation that prednisone’s grasp is gone. Fifty pounds of bloat have gone and we begin to see the end of the moon face as well. Our pulmonary doctor reports the best lung function testing that Rich has had in the last two years. His immunology is such that he can have the pneumonia shot. We pray 2016 will be pneumonia free. In the spring, our eighteen month old will begin his childhood inoculations all over again.

We welcomed in the new year with friends and looked forward with hope. As we rested on New Year’s Day, rejoicing that Rich was able to stay with us throughout the night, we discussed again our story.

What has defined us in the past and what would we want to define us in the future? Discovery through travel has been what we have missed the most. The planning as well as the journeys themselves are filled with fresh ideas and engagement with the expanded world around us.

And so, as has been one of our goals, we once again look towards seeing new places, meeting new people and learning new things. Debates continue as we consider the pros and cons of various travel destinations we have been dreaming of. While Ireland has been on the top of that list, there is so much to do there that requires more energy than Rich yet has.

In the end, we decide, with the help of a serendipitous Groupon, that a tour of Iceland is our next goal. The half days we’ve planned of mellow activities like lounging in thermal pools and one full day of touring in a comfy motor coach going from volcano to waterfall to geyser to rifts between tectonic plates seem perfect for our current state. The right mix of rest and mild trails and stunning landscape. A trip not too long in length, but enough. It will be a blessing to see other shores where those tides that empower us have landed.

We decide to listen to Mr Bradbury when he said, “Stuff your eyes with wonder, live as if you’d drop dead in ten seconds. See the world. It’s more fantastic than any dream made or paid for in factories.” If we should chance to have all the celestial requirements in alignment, perhaps we’ll experience the Northern Lights and charge our souls.