On our very last evening in Iceland we found ourselves at midnight in the middle of an old airfield snugged up to the mountains… heads tilted to the sky, feet firmly planted on the sparse grass that covered an expanse of ancient lava.

Behind the ever-present clouds, we imagined we could see light moving. We used this time to set up the tripod and play with camera settings. In time, most of our cohorts had moved away from our spot. Curious, we followed. Beyond the tin huts and the motor coaches that seemed so out of place, we found the rest of the group. We could hear our guide calling out “keep taking pictures, wherever you see the light behind the clouds – it’s there.” Now and again, he would call out camera settings to someone who was frustrated. Tripod at the ready, I began clicking; camera already set to make the most of the cloudy light. Now and again, I changed the settings to those being called out. Then changed back again. The group began to disperse. “There!” Rich pointed. Clouds parted. I clicked.

The colors the eye could not see behind the clouds were beautifully evident on the camera screen. Stars peeking through the cloud cover and there it was in that glimmer of space in the night sky; the green glow and pink haze of the Northern Lights.

What exquisite, awe-inspiring phenomenon surrounds us! Sometimes hidden, like the spectrum of the aurora on a cloudy night, and sometimes before us in all its glory. We were in a country of wonders. It refreshed our souls.

Iceland was everything we could have wished for and more. Thrilled that we were able to travel successfully and spend days in a land so different from our own, eating foods we’ve never tried before, meeting new friends from around the world, walking “a walk that is measured and slow. ”

We strolled along the ocean’s edge. We straddled continental plates. We breathed the mist of the golden waterfall and lounged in the soothing heat of the waters of a blue lagoon. We rode the long haired stocky horses that are unique to Iceland; we learned to tolt. We hiked the edge of a dormant volcano’s crater. We were indeed beyond where the sidewalk ends.

With us were tools we had not used on travels before: trekking poles to give Rich greater stability and extra waterproof layers to guard against the damp cold that affects him more now than before his new birthday. They served us well. Our time in Iceland was only a few days. The early morning we arrived, the wind began to howl and any excursions we had planned were canceled. Serendipity! A quick nosh at a local café and our room was ready for us. The universe gave us the time we needed to rest and relax before braving what had become seventy-five mile an hour winds to find dinner. Everywhere we went we were received as friends. Despite the wind, rain and chill, we found respite and welcome wherever we ended up. In the past, this short time spent away from home would have been considered certainly not enough. At this moment, for us, it was perfect. Rich spent days afterwards at home gathering back strength… he had pushed himself to do all that he wanted to do. We were thrilled by how much energy and stamina he presented! We could have expected no more than we received. In spite of the needed post-trip rest and recuperation, our travels have once more done what they always have done… nourished our hearts, cleansed our spirits, and made our souls sing.

We returned to our quarterly appointments. Rich’s PET/CT scan continues to show “no evidence of disease”… he continues to be in remission. He is given, as most almost-two- year-olds are, his vaccines. Diphtheria, Tetanus, Polio. More milestones on our journey. That this is allowed is an indicator that his immune system is on the mend. It will be another year before he can receive any live vaccines, and care must still be taken as our last bout of the flu warned us, but we rejoice that we are here at this point of this path.

And although the daffodils at home are popping up in the garden, the winds are blowing hard. It reminds us of the wind that sweeps intensely across that small island country in the North Atlantic. So we look at our photos of a trip that we thought was beyond us and celebrate that we did make it to the place where the sidewalk ends and found a rainbow of light in the midnight sky. 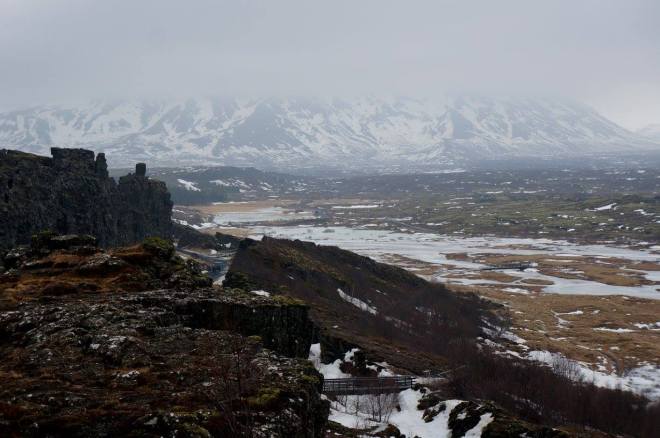 Let us leave this place where the smoke blows black and the dark street winds and bends. Past the pits where the asphalt flowers grow we shall walk with a walk that is measured and slow and watch where the chalk-white arrows go to the place where the sidewalk ends.