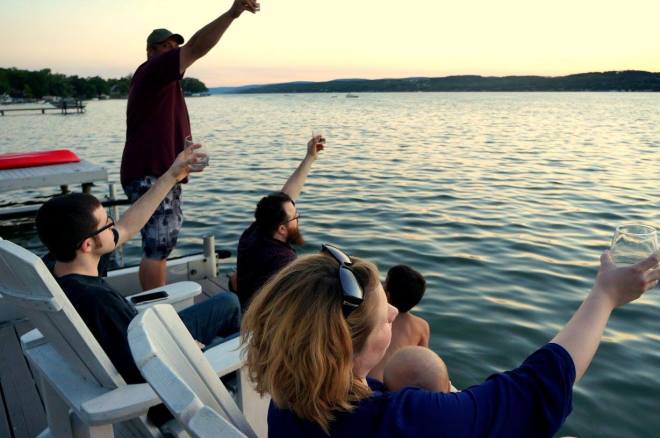 We look out the bank of windows that are at the back of the home we rented for the week. At the end of the dock are our kids and their kids. Across the water, the sun sets behind the hills and the clouds sending rays of light and bands of colors into the sky. This has become a nightly ritual of appreciation. Drinks are poured and seats found as the time comes close. The littlest ones may spend just a little more time in the water while their parents enjoy the changing light. There is a peace that speaks to the soul. It gives us comfort.

On Canandaigua, we have all come together and the week is full of food, drink, laughter and family. Moments of joy are found everywhere. When two year old Bean sings the alphabet song to his baby cousin who smiles and laughs at the attention. When my mom is cooking in the kitchen with her grandson-in-law helping to lift and carry. When Richard tosses his nephew high in the water and Boober comes up out of the lake with a huge smile. When the game of Monopoly just never ever seems to end. And if it does, it will not end well. It never does.

The house hums with joy. Sun, rain, sta*rs and clouds… we watch it all from hammocks, chairs, kayaks… fireworks greet us up the lake the first night. On the last, we give thanks. The next day we are to leave the lake and it is also the second birthday of Rich’s stem cell transplant. So the last night, in gratitude for the support we’ve had and the care we’ve been given as well as for his ever- improving health, we each of us send out a small candle lantern onto the lake as the sun is setting. One by one they bob away from the dock. One additional lantern is sent out for all of those who are on their own paths to finding health with prayers for it to come to them. The little lights glimmer as the lake begins to turn golden from the reflection of the sky. Our last sunset at the lake.

All week we had been having another celebration of sorts. The cymbalta that Rich had started had reached a plateau of helpfulness halfway through week two of use. The generalized neuropathy was improving and the spiking pains had lessened, but not to the extent we had hoped. We did not want to spend the week at the lake with exhausting pain as such a companion. We have an appointment to speak to a new pain group about ketamine, but with only a week to go prior to our departure for our trip, we needed a more immediate solution.

Medical marijuana was next on the list. New to New York as a legal option, there was little on the internet and what was there described a drawn out process. We had days before we left. Grace was on our side. We called our stem cell and pain management cohorts to inquire only to find that yes, our doctor was approved by the state to certify patients for the Rx. The response was near to instantaneous. Via email, we received Rich’s certification. We logged onto his NY State account that had been opened years ago for student loan applications. On the appropriate tab, his certification number was entered and the rest of the fields populated. We hit submit. And were approved. Within twenty minutes of our inquiry, we were approved. In two days, Rich would receive his necessary state issued card and we would make an appointment at the dispensary to fill the prescription.

After a consult regarding options and procedures, we left with a few bottles of what was basically a pot-laced syrup similar to cough medicine. Rich began with the low dose as recommended and which seemed to have a slight effect within an hour. At about three hours, it seemed to have increased the pain relief tho’ it wasn’t a complete fix. We didn’t expect it to be since we’re just starting on the lowest dose. But it was an excellent beginning.

In a few days, we found we needed to change from the syrup… the amount of sugar was wreaking havoc with Rich’s stomach and he blew up like a balloon. We were able to consult with the dispensary’s pharmacist and nurse over the phone and it was decided the pure oil would be a better option. And so far it has been. Each increase in dosage has had an effect the first day with feeling drowsy… dopey. After that, it continued to do its job with better effect and a clearer head.

We do meet with the ketamine group… our special K’s. They give us more complete information during our consult than we had gotten from our pain management cohorts and it is less intrusive than originally explained. Rich would go once a week for a five week period, four hours per session for a ketamine infusion. He would be monitored as if he were under anesthesia, which in effect he would be. If necessary, he would go back after six months for a booster… a single four hour infusion. While the medical marijuana has less potential side effects, Rich has to take it in a timely manner three times a day for it to remain effective. And, to weigh all variables, we do have to consider that the potmeisters to not accept insurance. But the ketamine treatments would be covered. And, most importantly, the success rate is very high.

We decide that once the insurance approval process is completed, we will give the ketamine a try. The special K group requires Rich to have his cardiologist give his blessing as a precaution based on his heart issues during chemo. We will always have our reefer madness as a backup if the side effects are problematic and the infusions are stopped. 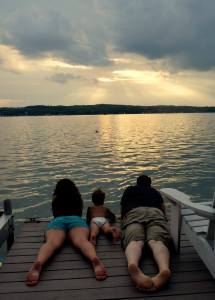 In the meantime, our nights are less interrupted by the painful spikes of neuropathy. Instead, our week at the lake was spent, after those splendid sunsets, with our littlest grandson sleeping in the same room with us. As we drifted off each night, and looked over to him sleeping, we couldn’t help but smile at the lullaby that has once more filled our family songbook. It’s the same one we sang to this little one’s father. Life truly comes full circle.