Whether it’s chemo brain, current medications, or some other reason, our communication lately has been reminiscent of the Star Trek: Next Generation episode referenced in the title of this post.

As we’re prepping for our Memorial Day weekend gathering of friends we have the following exchange:

Me: What is the expiration date of the salsa in the fridge? Is it next year?

Rich: I still have to pick up the lemonade.

Me: I get that, but what is the expiration date of the salsa in the fridge? Is it next year? I think it is.

Rich: I haven’t picked up the lemonade, I still have to pick it up.

Me: Forget the lemonade, does the salsa expire next year?

Rich: Why are you raising your voice?

Darmok and Jalad at Tanagra. Indeed.

For those unfamiliar, the crew of the Enterprise is tasked with building a relationship with a group of aliens that seem to have an impossible language code to break. The ship translator is at a loss.

It is not until further into the episode that the two protagonists share fire: “Temba, his arms wide.” And from that, Picard understands: “his eyes open.” Captain Picard rightly deduces that his counterpart’s language is based on speaking in allegory. The experiences within the Tamarian legend of Darmok and Jalad at Tanagra need to be known in order to understand the reference and how it applies to the current situation. In this case, the two warriors were forced to cooperate when faced with danger; their shared adversity bringing them closer together.

I read the book “In Shock” by Dr. Rana Awdish this past weekend and it brought this Star Trek episode into my consciousness as well. Dr. Awdish, a critical care physician, died. And lived to write about it. Her book chronicles her extraordinary physical and emotional journey and, in large part, pinpoints her dissatisfaction with how she, and the physicians who are now treating her, the ones she had worked with, were taught to interact with patients. There are emotional walls that they are advised to build… don’t get to close, you need to be remote, removed, objective. And while it makes a certain sense, by the same token, you can be treated like a disease, a procedure, a treatment. Not the living, breathing person you are. There are moments when the doctors are discussing her medical status as she is bleeding out. She can hear them. She sees what her patients have seen and heard from her and with that, she comes to understand that there is much important and relevant information that she, and her colleagues, miss. A certain language is used that is not necessarily patient friendly; a layperson can interpret the message wrong easily. With this experience, she then works for and continues to this day to work for as an educator, a change in how healthcare providers interact with their patients; to bring empathy and compassion. To fully understand one another.

We’ve discussed here how we were able to take a step back and observe when Rich was back in the stem cell unit for an infection and discern the differences certain nurses and orderlies interacted with us and how different those interactions made our day. Since we were not in crisis mode or going through a treatment regimen in the stem cell sense of the word, we were given an opportunity to take notice as Dr. Awdish does from her perspective. And it opened our eyes wide.

When Rich begins to speak in Tamarian, I need to remember those lessons from our past. I need to have my eyes open. And to hear, not the just words, but the meaning. I need to understand the nuances correctly and to take in all the possibilities of what he is trying to say even when the words and their meanings are clear. I need to put myself in his place. Sometimes, with the passage of time, we forget to do that. We both have frustrations. We learn to lay them aside again and communicate.

The salsa? It expires next year, so there was no rush to get any chips and since we weren’t getting lemonade anymore, we didn’t need to go to the store after all.

We serve homemade hummus instead. 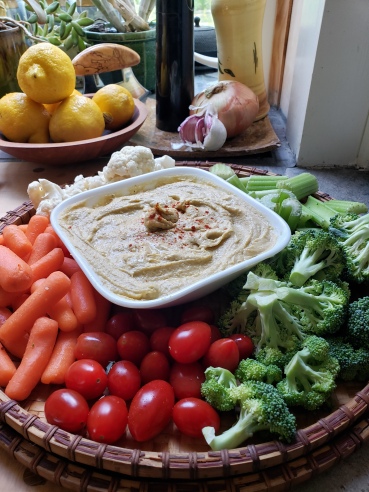 One thought on “Darmok And Jalad At Tanagra: The language of understanding”