Everything happens for a reason. People say that all the time and usually it’s the last thing you wanna hear when that black cloud is following you around. Really? That’s supposed to make me feel better?

But then that Serendipity rears her pink sea serpent head and you have to wonder.

The fender bender of this past weekend did not in any way feel like a silver lining. The train ride to work on Monday was torture and it was impossible to stay at work. I decided I had to work from home on Tuesday to avoid the jostling that was making my head, neck and back worse. I couldn’t even think.

Tuesday also happened to be another morning of transfusions… red cells and platelets… for Rich. Although I hadn’t planned on going, now that I was working remotely for the day, I figured why not. We prepped our bag of tricks with food, games and our photos. Nick joined us as well. I worked from my laptop while the guys played backgammon and noshed from our plate of goodies.

As once more the red cells were uneventfully being infused, the stem cell nurse showed up chair-side. We weren’t going to get the platelets. Cancelled. Instead we were going from the Monter Center to North Shore Hospital. The number of stem cells on his latest blood work was wonderfully high and it was time to start the harvesting!

What serendipity that I was not in the office but able to be a part of this process! We had been told that the room where the apheresis takes place is not big enough for any visitors during the harvest. And they were right. But again, serendipity… it was afternoon by the time we got there and with only one other patient in the room, there was a bit of space for me to stay by Rich’s side. And the decision was made to also utilize his port, which was left accessed by the transfusion team, and transfuse the platelets while the harvesting was taking place. Usually your first day of harvesting is a full day that begins in the morning. But the body knows no timetable and when the time is right, you go. 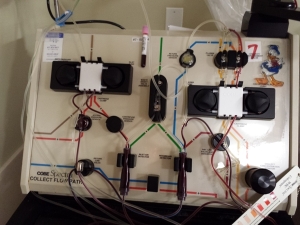 Anyone who has donated platelets would be familiar with the process if not the machinery itself. The patient lies in what seems to be a cross between a wide recliner and a bed. There are familiar bits and pieces… IV pumps, blood pressure cuffs… things you’d find in most hospital rooms. Then there is the apheresis machine itself. A big bulky thing with tubing following a prescribed path, paths that are painted on like a New York City subway map. Between are rotating knobs, small collection tubes with little valves seem to regulate the speed of things. Deep within the bowel of this massive block of equipment is a centrifuge that spins the blood to separate out the different components so the stem cells can be collected and the remaining blood products can be returned from whence they came. The machine jiggles like a slightly off balance washing machine on the spin cycle. We can’t resist the temptation to continually sing that song from the Looney Tunes that was always played when there was a factory or some kind of mechanized action going on. Powerhouse by Raymond Scott. This thing looks pretty Rube Goldberg. It fits.

So of course, you consent to be hooked up to this contraption that looks like a 6th grade science project…. Why not?

The process requires an atrial line from one arm to draw the blood out and a venial line to return it back. The hand on the arm with the atrial line has to remain still except for regularly squeezing a stress ball to keep the blood pumping at the proper rate. Saline is also being infused to keep the body fluid ratio stable. An anticoagulant is used to keep the blood from clotting but this can cause some calcium imbalance. If a tingling on the lips is felt, then one more additive is given in the IV which can take some adjustment to find the right amount of calcium.

When the blood is returned from its trip around Manhattan, it’s no longer at body temperature. Rich began to feel chilled, so the nurses brought a heated blanket unlike any we had seen before. It consists of what was basically a huge celled bubble wrap that had microscopic holes in it. This was attached to a hose that looks remarkably like the one attached to our dryer vent at home. The hose pumped in heated air that filled the chambers, and released small and gentle streams of warm air. 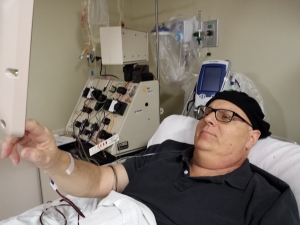 So we’ve got a Rube Goldberg contraption with spinning knobs on a subway map, a blanket of glorified bubble wrap attached to a hair dryer at the end of a dryer vent and a Looney Tunes soundtrack. After spending the last few months gratefully chugging radioactive glogg and letting everyone pump beneficial poisons through veins, how can this possibly seem ridiculous?

The word harvest to define the collection of stem cells always seemed odd. But Henry David Thoreau said “The true harvest of my life is intangible – a little star dust caught, a portion of the rainbow I have clutched.” Stardust and the rainbows…. Now that just sounds like a happily ever after… and that we can live with!