Blood: The fluid circulating through the heart, arteries, veins, and capillaries of the circulatory system. Blood carries oxygen and nutrients to the cells of the body and removes waste materials and carbon dioxide. What a simple definition for an amazing thing! Along our way these last three years the one constant has been the importance of blood tests. Vial upon vial has been drawn and analyzed. 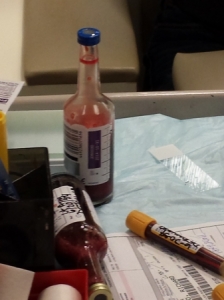 At various point in time, our focus on the different parts of the reports that have been generated with each drop that has been put on a slide has differed depending on where we were on our journey. Rich’s first blood test gave us the initial indication that there were concerns.

Three years ago when we came back from welcoming our little Bean into our lives, Rich was so tired that he went to get some blood work done. Our primary care group, as we have reported here at the start, were brilliant in putting a few clues together and sending Rich to his gastroguy and the rest is our history. Once chemo started, our focus was on those white cells, red cells and, particularly, platelets. When the counts got too low and chemo delayed, platelets and iron-rich red cell infusions were added to our schedule. As we got closer to the end of outpatient chemo treatments, everyone kept their eye on the stem cell count so as to catch the best chance of harvest. Once admitted for isolation and the week-long bombardment of high doses of chemo cocktails, the red/white/platelets were back on the daily reports.

We knew the day Rich’s bone marrow died. We knew also the day that those precious stem cells engrafted, eight days after the transplant, and began making new marrow… a day of quiet celebration. Since that point, the blood work has been an indicator of Rich’s continued recovery. Finally came the time that the platelets were stable; slowly getting close to where they need to be. Anemia gone. Still we watch liver and kidney function… those poor organs whose job it is to clean the body of the beneficial poisons that were so crucial for ultimate health are still struggling to catch up. They’re still on our radar.

But when we look back to the time after we left the hallway within a hallway, our little room that reminded us so much of our Amtrak cabins, our focus has been on Rich’s immune- suppressed system. Every blood work since has been a study of the immunoglobulins… the antibodies that are found in our blood. These can tell us where Rich’s immune system is up to… or, as has been since his new birthday, down to. Our reports show the three of most concern, IgM, IgA, IgG continue their very slow rise.

As anyone who has followed our journey here knows, the first year after leaving our stem cell cocoon, Rich caught any bug that happened near him. Pneumonia being his illness of choice, we became well versed in protocol at the ER. Our pulmonary gurus went so far as to forbid him to sit in their waiting room but had a clean room set up for him whenever we had appointments. The blessings of health care providers who really care have been with us on our path.

Our latest bloodwork shows that Rich has gone from a low of 345 in September for the most important (to us) immunoglobulin, two years after his transplant,to a much improved 656 mg/dl this month. Normal range is 694-1618 mg/dl… so close! Our doctor had said she’d be pleased as long as it was above 400. While we look to be comfortably in the middle of the range, we’ll take our new number with gratitude.

This improvement allows us to continue in a way that we thought was yet another year in the future. Rich has been having his childhood vaccines re-administered for the past year. Stem cell transplants reset the body and many of the titers for childhood diseases are no longer there. On a carefully timed schedule, he’s had his HiB, Polio, Diphtheria, Tetanus and a few different pneumonia injections. Live vaccines were not on our radar. His immune system would not allow us to have those which include mumps, measles and rubella. With the latest outbreaks of these diseases due to the anti-vaxx contingent, it’s been nerve-wracking. The herd protection that comes with a large percentage of the population being inoculated has been lost. No longer are those who are too young for vaccines or those whose health precludes them protected. We’ve been lucky to avoid them. The results could have been devastating.

We are told now that in a few days Rich will receive his MMR shot… a live vaccine. This milestone is one to celebrate… the numbers are lining up the way that they should. So carefully have the live vaccine administrations of our grandsons been timed with our family visits as per our team’s instructions. No longer will this be a concern. While platelet numbers are still low, while immunoglobulin counts are nudging but not quite in the normal range, we can have a little breathing room. We have gone a full year without a hospitalization. The red card that gains quick admittance to the ER and takes us straight to a private room has not been used in over twelve months. Asthma and bronchitis have still been with us, but with less devastating effect.

The new life Rich has been given has come from his own blood. The stem cells were his own, harvested through apheresis over the course of two days. That science has been able to define these procedures to break down and then renew the body is a gift. That it comes from one’s own body is a miracle. An anonymous quote says “If power is defined as the ability to do anything and create anything, then the stem cell is the most powerful ‘known’ life force.” We are made of that power. That power flows through us all every second of every minute of every day. We are composed of approximately 125 TRILLION cells. With that kind of power within us, what is not possible?